In the late 1960’s when Egbert Adjesu and the Ghana Film Corporation decided to adapt one of the late Bob Cole’s concert party plays to screen, little did they know that they were creating a time capsule of nostalgia, wits and immortal characters brought to life by an assembly of talented actors and actresses.

The result was the 1970 Ghanaian classic film, I TOLD YOU SO. For those of us that were born many years after this iconic time in the Ghanaian artscape, we were privy to yearly screenings during Independence Day celebrations in March and Republic Day celebrations in July. 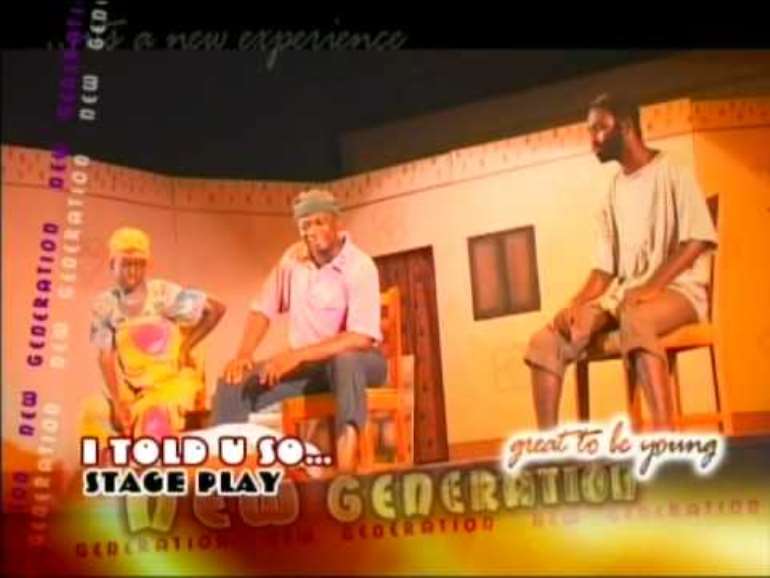 It was during these celebrations that we fell in love with the iconic actress and comedienne, ‘Araba Stamp’ who melted our hearts and carried us along on her journey of humor and naiveté. We never stopped singing along to Kwesi Twii’s melodious solos backed by raw yet truthful voices. 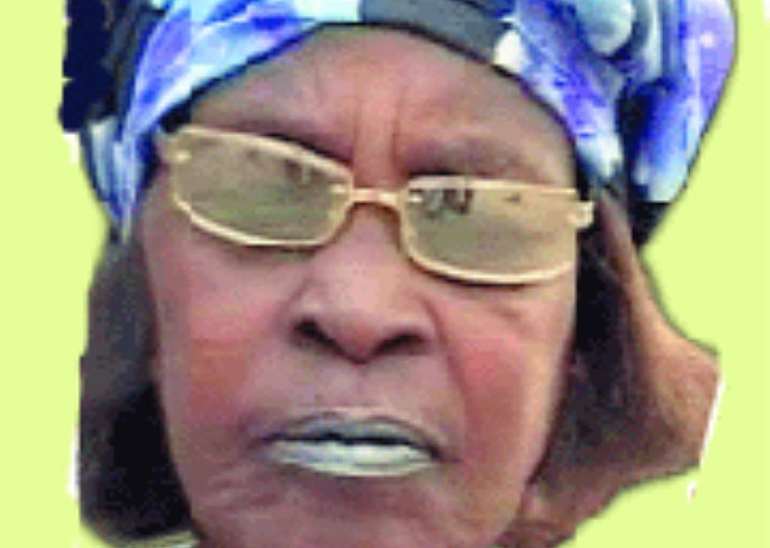 Araba Stamp
In our own version of a super-hero, “Akonta Esuo Abrobour” gifted us with the now popular line, “I don’t fear huu” many days before he would seek shelter in a water barrel known in Asante Twi as ‘ankora’, which became the visual connection to the film watched by anyone. 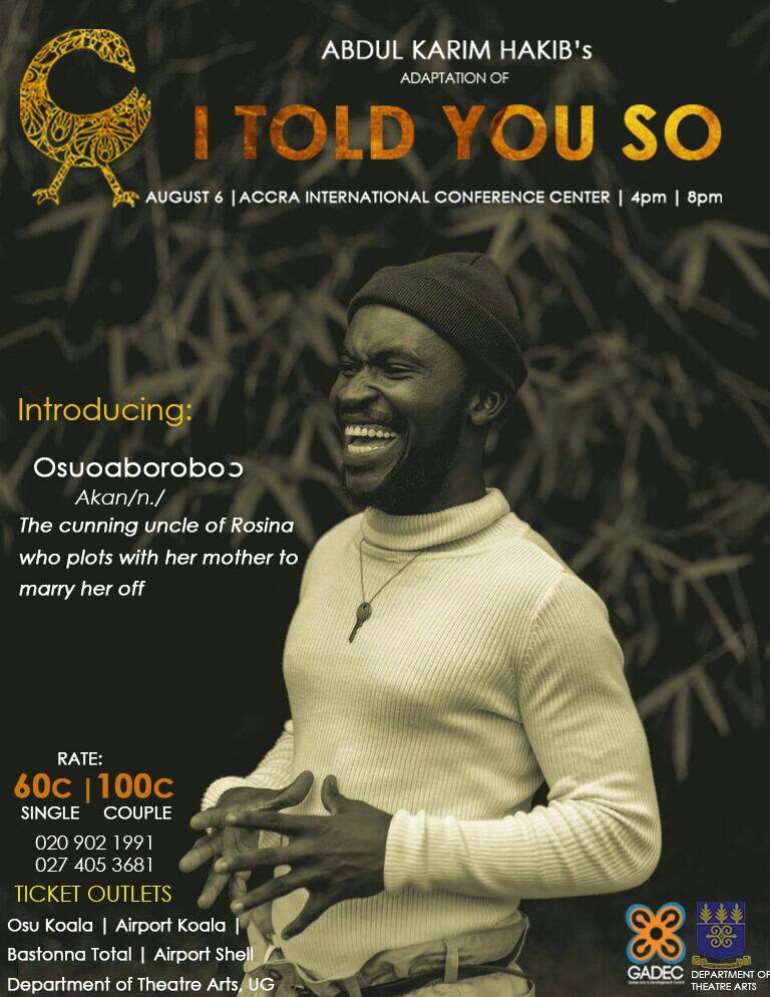 On Sunday 6th August, 2017, the Accra International Conference Center, will open its doors to the world for a magical night and awe-inspiring evening of original Ghanaian music, culture, fashion and style from the 70’s, and stellar acting prowess in the return of “I TOLD YOU SO”.

The Global Arts and Development Center (GADEC), creatively helmed by Abdul Karim Hakib (Vagina Monologues, 2015) in partnership with and The Department of Theatre Arts, University of Ghana will take us back in time, to more than 40 years ago, re-creating every single detail and keeping to the accuracy of the time in reconstructing the drama that became a sensation.

“I TOLD YOU SO” is the story of a fathers’ (Kwasi Twii) objection to his daughter’s (Rosina) marriage to a rich man (Kwabena Jones). When his wife (Araba Stamp) and her cunning brother (Akonta Esuo Abrobour) defy his wishes, they go ahead to marry Rosina off to Kwabena Jones. Kobina Jones, the said rich man, is not well known by either Araba Stamp or her brother Akonta but his constant display of money and affluence further blinds his victims. 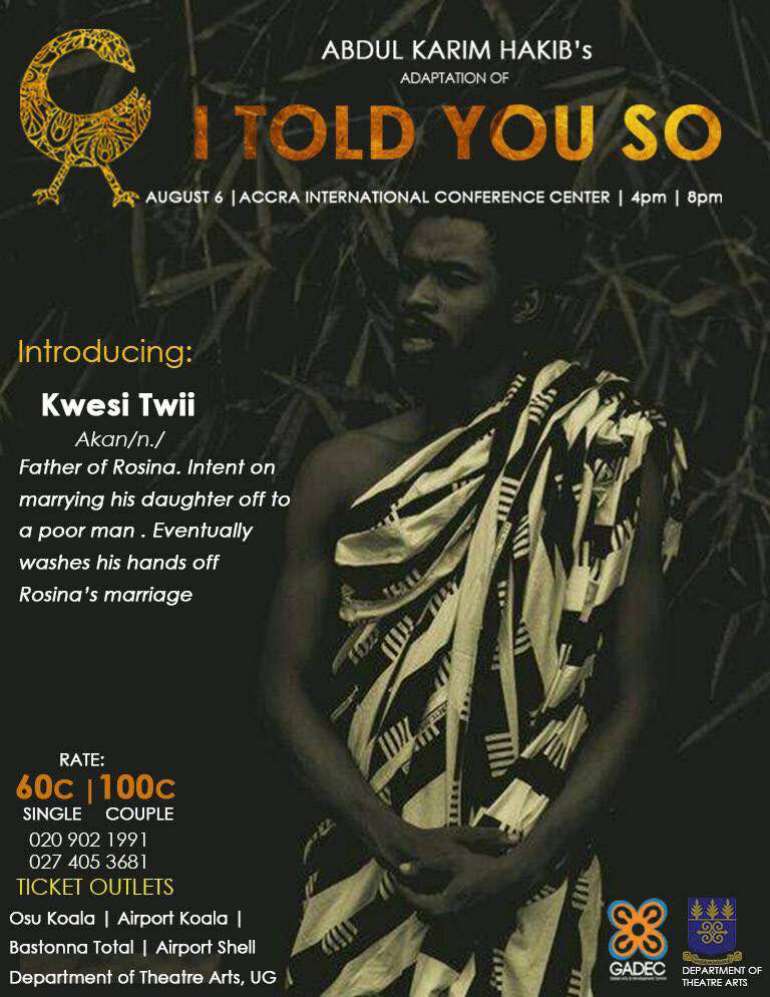 At the wedding ceremony in her father’s absence, the police raid the grounds in search of Kobina Jones who it is later revealed, stole some diamonds from the mines and absconded to Nigeria. When the wedding is marred, Kwesi Twii has just returned from an errand to find a group of well-dressed people sitting in sadness, upon hearing the news he utters the now famous words to his daughter ‘I TOLD YOU SO”. The story chronicles the conflict between families in post-colonial Ghana as they struggle to choose between money and love.

GADEC presents an original stage presentation and fully crafted musical version of the Ghanaian Classic film “I TOLD YOU SO” opening on Sunday, 6th August 2017 and showing twice at 4pm and 8pm. Tickets are available at Star FM, Batsoona Total Filling Station, Airport Shell, Osu Koala, the Department of Theatre Arts, University of Ghana and at the gates of the Accra International Conference Centre. Tickets start at Ghc60 for singles and Ghc100 for couples.

Previews begin at the end of July to select audiences and the press across the country. This adaptation will feature  live vocal performances from the cast backed by a range of talented instrumentalists and musicians in their own right, fashion and style carefully curated, crafted and modelled after those of the era which is being presented, among other surprises.