Elsewehere, Manchester City kept the heat on Liverpool after their emphatic win over Watford by dispatching West Ham at the Etihad.

Manchester United and Arsenal also picked up wins in the capital, while Southampton piled on more misery for hapless Fulham. 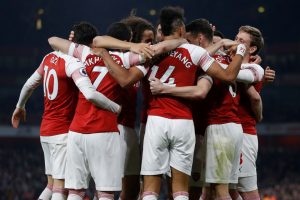 The hosts broke the deadlock after just four minutes when the recalled Mesut Ozil slammed home his fifth goal of the season.

Sead Kolasinac played the German in and he clipped the ball over the onrushing Artur Boruc.

Henrikh Mkhitaryan doubled Arsenal’s advantage in the 27th minute after some brilliant link-up play with Ozil.

But Bournemouth pulled a goal back on the half-hour mark when Lys Mousset fired in after Dan Gosling had taken the ball from Matteo Guendouzi.

Arsenal made it 3-1 less than two minutes after the restart, with Laurent Koscielny grabbing the goal.

Shortly after Ozil had hit the woodwork, Arsenal made it 4-1 through Pierre-Emerick Aubameyang.

A free-kick from substitute Alexandre Lacazette put Arsenal 5-1 up 12 minutes before the end.

Southampton forward Charlie Austin put the ball in the net in the early stages, nodding home from close range, but it was disallowed after he was adjudged to have barged Fulham goalkeeper Sergio Rico.

However, the hosts did go ahead in the 23rd minute when Oriel Romeu drove home from the edge of the box after keeper Rico punched away a right-wing corner.

James Ward-Prowse put Southampton 2-0 up in the 41st minute.

Nathan Redmond’s shot from the edge of the box was kept out by Rico but Ward-Prowse was alert to tap home the rebound. 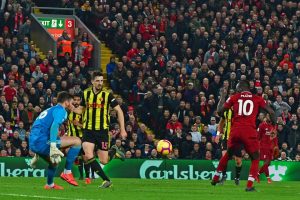 Liverpool reminded everyone they are still firmly in control of the title race with an emphatic win over Watford at Anfield.

The Reds, who had drawn four of their last five fixtures in all competitions, needed just nine minutes to open the scoring.

The hosts had enjoyed the lion’s share of possession and territory in the early stages and were rewarded when Trent Alexander-Arnold’s cross was expertly headed into the top corner by Sadio Mane.

While Origi seemed to be a little rusty on the left wing, Mane was taking full advantage of being given a central role in the absence of Firmino.

The Senegal international doubled the home side’s lead in the 20th minute following another Alexander-Arnold ball into the area.

Salah, as is so often the case, was proving a handful on the right channel for Liverpool and the 26-year-old again tested Foster from an acute angle after jinking his way into the area.

A last-ditch block from Craig Cathcart stopped Mane from potentially sealing his hat-trick.

But Origi cut in from the left and drove low beyond Foster at his near post to put Liverpool 3-0 ahead in the 66th minute.

Mane took a touch and then, with his back to goal, lifted the ball over a flummoxed Ben Foster with an audacious back heel that nestled in the net.

The influential Alexander-Arnold had his third assist of the evening, curling a free-kick to the back post, where Virgil Van Dijk thundered his header across Foster with 11 minutes remaining.

Van Dijk got his second of the evening moments later with a glancing header from Andrew Robertson’s ball into the area. 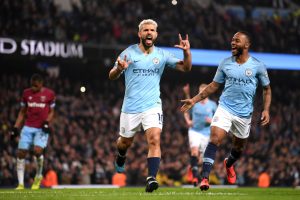 City ensured they kept the pressure on leaders Liverpool with a comfortable win at the Etihad against West Ham.

Manuel Pellegrini surprised plenty of fans at the Etihad by giving defender Ben Johnson a start at left back in place of the injured Aaron Cresswell.

City and West Ham went in at half-time with the score 0-0 after the hosts had bossed possession but failed to make the most of it.

The closest Pep Guardiola’s men went to scoring was in the fourth minute when David Silva met Kevin De Bruyne’s delivery and sent a shot against a post.

City took the lead in the 59th minute through a Sergio Aguero penalty, awarded after Felipe Anderson brought down Bernardo Silva.

Aguero sent Lukasz Fabianski the wrong way as he registered his 18th league goal of the season.

Chelsea may have left Kepa Arrizabalaga on the bench for the visit of Tottenham, but it was their attackers who made the headlines at Stamford Bridge.

Gonzalo Higuain hit the post after half an hour when he sliced a volley from the edge of the area.

Spurs striker Harry Kane was involved in an altercation with Cesar Azpilicueta, appearing to move his head towards the Chelsea defender, but referee Andre Marriner took no action.

It was Spurs’ turn to hit the woodwork on the stroke of half-time as Harry Winks sent a dipping shot crashing onto the crossbar, but the first half ended goalless.

Chelsea went in front in the 57th minute as Pedro got in behind Toby Alderweireld and fired through the legs of Hugo Lloris.

The hosts sealed the win when a defensive mix-up saw Tottenham defender Kieran Trippier turn the ball into his own net six minutes before the end. 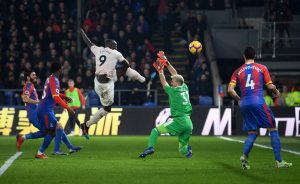 An injury-ravaged Manchester United were able to put Crystal Palace to the sword, despite their weakened side.

United broke the deadlock in the 33rd minute when Romelu Lukaku fired the ball into the corner of Vicente Guaita’s net.

Having missed an earlier opportunity in the box when unmarked, the Belgian curled home a sumptuous right-footed effort after a rampaging run from the impressive Luke Shaw.

Lukaku got his and United’s second goal of the night in the 52nd minute when the Belgium international volleyed home in the box after a goalmouth scramble following Ashley Young’s corner.

Palace reduced the deficit to a single goal when Joel Ward made it 2-1, heading home in the 66th minute.

Ashley Young gave United breathing space when he made it 3-1 in the 83rd minute.